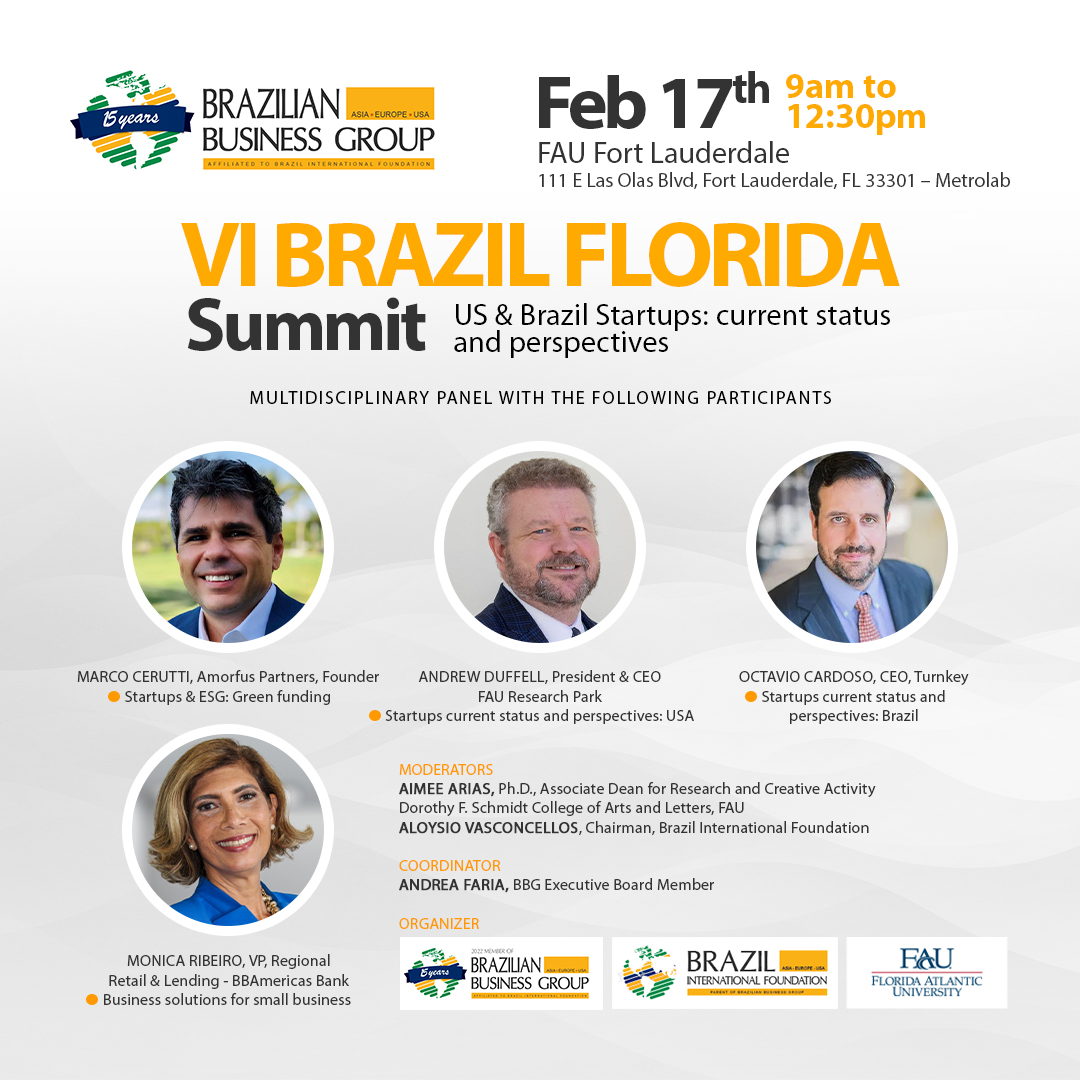 Cerutti holds a degree in economics from PUC-RJ, an MBA in Marketing and Finance from IAG PUC-RJ and a specialization in Fintech and Choice Architecture from the Wharton School and NeuroEconomics from the High School of Economics, with more than 25 years of experience in the corporate market. and Project Design.

In addition to all the institutional baggage of the corporate world, Cerutti is a specialist in technical analysis, starting to operate in the financial market in 1993. Throughout this trajectory he acquired experience and experienced several market events such as the crisis in Asian countries in 1997 and of the “internet bubble” in the years 2000-2002.

Duffell’s international background and multiple economic development roles have shaped his forward-thinking and problem-solving approach regarding the development of South Florida’s economy using technology as a catalyst. Since becoming president & CEO of the Research Park at FAU in 2011 the Research Park’s contribution to the region’s economy has surged, largely due to the repositioning efforts Duffell has implemented.  The Research Park at Florida Atlantic University® is home to technology companies and research-based organizations working to support the research and development activities of Florida Atlantic University and to foster economic development and broaden the economic base of Broward and Palm Beach counties. Under Duffell’s leadership it has become known as South Florida’s laboratory for new entrepreneurial ideas and technologies and is a valuable asset in the region’s economic development efforts. Duffell’s personal achievements include being named the Greater Boca Raton Chamber of Commerce Business Leader of the Year and being honored as a South Florida Business Journal  Ultimate CEO, both in 2017, as well as a 2015 Palm Beach Ultimate CEO by the South Florida Business Journal and being recognized in January 2015 as a “40 Under 40 Rising Star in Economic Development” by Development Counsellors International (DCI) at the International Economic Development Council (IEDC) Leadership Summit. Currently Duffell serves on the boards of directors for the Greater Boca Raton Chamber of Commerce, Florida Economic Development Council and the Children’s Home Society of Florida, as well as other advisory boards related to economic development.In 2000 he was conferred the degree of Master of Arts (Hons) in European Studies by the University of Aberdeen and in 2015 earned a master of business administration (MBA) from Florida Atlantic University.

Monica was born in Rio de Janeiro, a “Carioca da gema”. She has a Psychology degree from University of Santa Ursula. She has been married for 36 years with 3 children, Eddie, Daniel and Gabriella and 3 granddaughters Vasari, Talis and Ellia.

In 1988, Monica moved to the United States with her husband and started her career in the retail industry as a buyer, manager, and director of retail operations.

After successfully completing a management training program she joined the finance industry nearly 25 years ago. Since then, she has held positions such as Branch Manager, Market Growth Leader, Regional Manager, Premier Customer Manager and Business Banker, working for American Financial Institutions such as Bank of America, BB&T and Bank United. And was also the first general manager of a Brazilian branch in South Florida.

Monica is currently Vice President, Regional Manager of the Retail and Lending areas at BB Americas Bank. During her career, she has received multiple awards for sales performance, community leadership and a diversity champion. She is a dynamic management professional, creative and experienced leader with the knowledge to help entrepreneurs and professionals achieve their financial goals.

Furthermore, Monica has a passion for community service, dedicating her time to engaging and helping the business community. She believes in connecting people, building partnerships, developing relationships, and creating opportunities. She joined the Brazilian Business Group when the group had few members and became president of the entity for two terms. Monica was a volunteer at the 2010 US Census, educating and motivating the Brazilian community to participate by answering the questionnaire and was invited to take on as President of the 2020 Census Complete Count Committee for the Brazilian community in Florida. She was also a member of the Pompano Beach High School Advisory Board, a founding member of the Rotary Club Boca Raton West, proud former president of the Greater Pompano Beach Chamber of Commerce, current Co-Chair of the Brazilian committee of Fort Lauderdale Sister Cities International, Director of the Executive Board of the Brazilian Business Group, member of the Focus Brazil Business Awards and last but certainly not least, member of the Citizens’ Council of the Consulate of Brazil in Miami.

Monica is passionate about her family, career and community and finds the values ​​her parents instilled as meaningful today as they were at the beginning of her journey.